Liz loves flowers! It’s no wonder she sells buckets of them on the street. She’s been using a hearing aid since she was six. It helps her listen to all sorts of sounds. On the job, Liz can hear the voices of customers clearly, and she can stay safe from traffic. 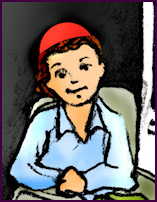 David never stays put. He’s always on the go, go, go thanks to his wheelchair. You’ll find him zooming around in school, at the Synagogue and even in the mall. He lost his ability to stand and walk after a car accident in grade eight. 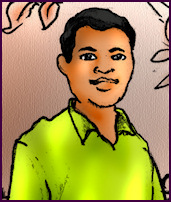 Justin lives for music. He even dreams of dancing in his sleep! Justin has turned his passion for rhythm into a career. He teaches several classes, and one of them happens to be hip-hop. Justin uses an artificial leg because nothing exists below his left knee. 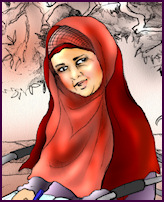 Mrs. Ali is an extraordinary poet. She’s won many awards for her books. She often writes about her religious faith, Islam. For the past four years, Mrs. Ali has been using a walker. As she’s getting older, it’s becoming harder for her to stand and walk.

Dr. Sharma is a hardworking family doctor. He helps people with all sorts of health problems. His weakness is wife’s vegetarian Indian cooking. Dr. Sharma has trouble balancing his body, and suffers from pain in his ankles. The cane he uses gives him the ability to move around more freely.

Todd is the lead singer in a popular neighborhood rock band. He can burst out in tune for hours! Todd was born legally blind. He now uses a guide dog to go to and fro. His animal is trained, secure, and keeps him out of harm’s way.

Katrina enjoys working as a crossing guard. She recently came back from a trip to Greece. She was visiting her parents when she injured her elbow. Her doctor wants her to wear an arm brace for the next few weeks. Hopefully, she’ll recover soon! 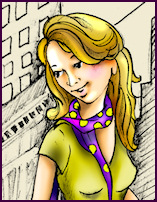 Momma is raising her only child, Maggie, on her own. During the week, she works as a bank teller. During her time off, she organizes themed neighborhood walks where her daughter learns new things. Momma also likes to read magazines when she’s not at work.

Maggie is super curious about everything. That’s why she looks forward to these educational walks. Her brain absorbs new ideas and concepts like a sponge. She is not shy in the least. Everybody in the neighborhood knows her. Maggie uses an eye-patch to strengthen her weak eye. However, you’ll catch her looking around everywhere!